Why His Eyes Glaze Over… 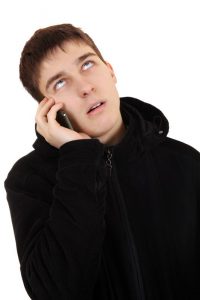 That moment when you’re talking with your guy and you KNOW he’s only kinda half listening, and you see his eyes glaze over, and you know you’ve lost him. Yep, we’re tackling that phenomenon AND you’ll be delighted to know that the solution is super simple.

Rare is a woman who has NOT had this experience. When we “lose” our guys in our conversations, we can easily make the mistake of assuming that he doesn’t care, that he’s heartless or clueless, and … we’d be wrong about that.

By design, men are instinctively Warriors, Protectors, Providers and Problem Solvers. When we are talking, men are naturally listening for What’s the Point? What’s the Problem?

The REAL problem, when women talk the way we are instinctively designed to talk? We girls say WAY too much, we provide FAR too many details, and his Hunter Operating System, his Database is overloaded. He zones out, his eyes cross, his mind wanders. We may get a head nod or an “Uh Huh” but you know and I know…he’s GONE. Here’s WHY and how to fix all that.

What he’s listening for:  When she’s speaking, and she’s “fine” (not upset) he’s listening for “What’s the POINT” If she’s NOT fine, he’s listening for, “What’s the Problem?” When he sees that this woman he cares about is angry or frustrated – what’s instinctive to him is to PROTECT her by analyzing the problem and by providing solutions to the problem. He’ll naturally want to know what caused the problem and what can he DO about it? She’s important to him and he wants her to be happy, so of course he wants to fix what’s not working for her. And here’s a key question that he’s asking himself – He wants to know, “Will she let me solve the problem, or does she just want to torture me by complaining?”

Transformational TIP: Before we speak, we should ask ourselves, “What do I REALLY need from him now? Do I want him to FIX the problem? Do I want his Opinion on the issue? Do I need for someone to listen with a compassionate ear? Is HE the right person to bring this stuff to? If so, let him know what you need from him, if you’re looking for a solution to the problem, if you need his advice, his opinion, or if you really just need a compassionate ear and maybe a “Poor Baby!”

Cut the Details. To women, the details are important (Who was there, what they were wearing, the name of the restaurant, who had the salad and who had the turkey Rueben.) It’s instinctive for us to remember the details and to SHARE the details, so it’s nothing to be ashamed of. We are the connectors of the universe, after all – all of those juicy details serve as relationship anchors, fact anchors, connection tools. We talk with our girlfriends this way all the time, no problem. These details seem to really matter (to us) but to the Hunter, with HIS database, these minutia type details don’t matter at all – they are actually an obstruction for him.

As his shoulders are slumping and he secretly wants to disappear into the couch, he’s asking himself, “How is this endless stream of details and sidebars relevant to what really matters?” He’s HUNTING  for the  point.  Is THIS the point? Is THAT the point? Am I supposed to remember this part?

For him, it’s like he’s being asked to put together a jigsaw puzzle, but we won’t let him see the box with the picture. WAY too much work…, pointless in fact. And so he won’t play. For him, these endless details and sidebars are exhausting and highly annoying. Ladies, let’s stop doing this to our guys, as it disempowers them.

What we need to do, to empower our guys is … Cut to the chase, jump to the bottom line, the heart of the matter, the “what matters to you” part. The important part, the actionable part, the what-you-need-him-to-know-about part, what you need for him to remember. Save the stories and all those juicy details for our gal pals.

Women tend to talk in stories, men need to hear in sound bytes. To get his attention and cooperation? Start with a Headline, so he can tell what it is that you need from the get go. When he knows what The Point is or what The Problem is, then he gets to relax, he gets to sort the information, rather than hunting through the trash to find the point. For him to know what’s expected of him serves to relieve TENSION. Guys like to conserve energy, so let’s help them not waste his energy.

Tension is what the body produces when it perceives a threat or an opportunity.  When she’s “running at the mouth”, without a clear point, he’s thinking, “How can I produce a result, when I can’t even tell what she needs? It MUST matter to her, as she’s…still talking, but when she’s gabbing about all kinds of things that don’t really matter, the gatherer is disempowering her hunter…

What to do? Let’s practice getting to the point. We’re going to train ourselves to give JUST the right amount of detail, which is … the amount HE needs in order to understand, in order to give us what we need, in order for him to do the part that we’re asking of him.

Business Tip: Always put The Point in the subject line of an email. We should organize our email                 content so that The Point and The Problem are super clear and right upfront. Cut the details. Edit out the fluff. Be clear and direct about what we need from him.

His OPINION. His ADVICE. When we ask a man for his opinion or for his advice, he’ll search his database of knowledge, wisdom and experience to give us the best he’s got. He’ll be responsible for, accountable for the GOLD he gives us – Careful here, as when we ignore or disregard his GOLD, it’s highly disrespectful and disempowering for him, so much so that he won’t likely share his gold again… if he’s seen that we’ve tossed his gold in the trash. Super important – before we ask him, let’s be clear – do we just need to vent, whine or complain? Do we want his ideas or impressions or thoughts? Or do we really want or need his GOLDEN OPINION, or his GOLDEN ADVICE? If we DO need his opinion or his advice, we’d better be respectful of it and treat it as the GOLD that it is.

My husband has this cute thing he likes to say about us girls. He says, “generally speaking, women are… generally speaking” – Just because we have a THOUGHT doesn’t mean we need to express it at this very moment…and it doesn’t mean that we should express it without considering IF he wants to hear it and if so HOW he might want to receive the information.

What I find that is helping me so much is to remember an acronym built on the word THINK. Rather than unconsciously “running at the mouth” – we can ask ourselves…. Is what we’re about to say….

To empower our men, our Hunters, our Problem Solvers and to have greater peace and harmony, let’s catch ourselves.  Let’s choose what to say, when to say it and how to say it.