What Comes First, Sex or Commitment?

By admin on September 24, 2015 in Dating and Matchmaking Services

This question is as befuddling to today’s modern day daters as the one about the chicken and the egg. Women tend to feel compelled to want a monogamous commitment before heading to the bedroom, and men tend to be ready earlier – Men are more playful and relaxed about sex, and they can’t help it – it’s natural for guys to want to know how things will work out in the bedroom before making that commitment decision.

You’ll be happy to know that there is a solution to this age old, pesky question.

As women we lose a chunk of our dignity when we “cave” to a man’s instinctive desire to have sex, before we feel safe, before the heart and soul say GO. When will a woman feel safe? When she knows that he is sincerely interested in all aspects of her, not just her physical body. When she knows that she has his focused attention and that he is willing to carve her out of the herd and explore intimacy and togetherness just with her, then she feels safe to open herself up to him. 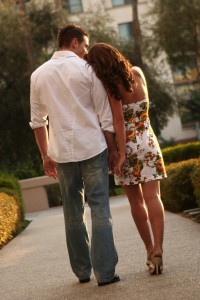 For women, sex is typically more than a fun physical act. Why? Oxytocin (the “love drug” or “liquid trust”) is released into our bodies, and stays in our female bodies for weeks. Guys release oxytocin during sex too, but it doesn’t last long, as what suppresses oxytocin? Testosterone…. So that’s why that guy didn’t call you; he’s already forgotten your name…

Round about Date Number Three, on the average, this matchmaker has learned that this issue will arise for a man and a woman to wrestle over. Here’s what happens. At some level, she knows that it’s too early to ask him for a commitment, and at some level, he knows she needs more from him before going there.
This dating coach sees so many stellar matches fall apart right there, over this very issue. And sadly, often it’s not really even talked about openly between the two – the budding relationship gets awkward, feelings get hurt, one or both feel taken advantage of or misunderstood or not appreciated or seen. Love and hope just shrivel up and die for the two of them. And the matchmaker cries…

What’s happening around Date Number Three? She feels pressure to cave, to hit the bedroom before she’s ready. Or he feels her resistance to head to the bedroom and he’s not ready to forsake all others and make her his life purpose, and so the match dies. Love loses, every time. It makes me cry, especially because as a dating coach and matchmaker, I see this dating breakdown happen so very often. I can find a new prospect for this particular client, but the reality is that the issue will be there with the next one too, and the one after that. It’s because this question (What comes first, sex or commitment?) is at the very heart of the differences between men and women.

Sex is a bigger deal for women than it is for men. To pretend that this isn’t so is to deny who we are as human beings. A smart and courageous man will be willing to wait for it. Think about it, guys. In your heart of hearts, I know what you really want is to stop dating altogether – You would just love it if your next first date were to be the last first date of your life, as she’ll be the angel who brings joy, togetherness, intimacy, lovemaking and sparkle to your life. The two of you will join hands in a gorgeous partnership and you’ll head off into the sunset to do life together. I know that’s why you’re really dating… so you can stop dating altogether. You’re happiest and the best version of yourself when you’re in love with one beautiful, special woman. I know that to be true about you guys, as I’ve been interviewing single men for over 25 years now.

A smart and courageous woman will give a man good reasons to be willing to wait, and she’ll give him lots of appreciation for his willingness to wait. She’ll be warm, playful, affectionate and spontaneous, so he gets to have lots of fun along this get-to-know-you journey – a journey that is taking longer, sometimes much longer than he wishes it would. She’ll be generous with her time, happy to meet him half way or in his neck of the woods, rather than expecting him to drive cross down for each date. She’ll be respectful of his financial resources – it’s a HUGE bummer for a guy when faced with the reality that he is continuing to invest his precious, hard earned dough in these early relationships – relationships which most of the time…go nowhere. His financial planner is telling him to STOP doing this. And so lots of men gravitate toward the coffee date.

Think about it, ladies – we want a guy who has plenty of resources, and yet we also have this idea that each man who dates us should be shelling out $50 – $100 per date without a thought. We want our guy to be responsible, right? Well… how long can a guy do this before dating becomes a serious financial drain on him, indeed before it becomes irresponsible for him to keep flushing hundred dollar bills down the toilet? Women can help extend courtship (what I call Pants On Partnership) by being generous and creative, and by being easier to please, less princess-like in the early dating stages. A smart and courageous woman will make dating more FUN and less of a burden for the men she meets. She will be happy to (or at least willing to) save the fine dining adventures for later, and she might look for opportunities to provide some fine dining adventures for him along the way – whipping up something magical for a picnic, for example…

The answer to the question lies uniquely within each couple, and the way to get to the answer is through openhearted, authentic communication. The good news — Speaking your truth gets easier with practice.
It requires discipline and a willingness to negotiate and compromise — on both parts.

Here’s some inspiration for you — Alicia and Rob are hanging in together, while the logistics of their relationship settle in. They’re right around Date Number Seven — she’s managed to hold his interest (big time) and keep her pants on too. And they’re having the most gorgeous love affair. Did Rob want sex right away? Of course he did – and the sweetness, kindness, love and playfulness she brings to his life makes the waiting worthwhile for him. Is it her chicken parmesan sandwich that keeps him coming back? Is it the way she wrestles with his chocolate lab? Is it the sweet, flirtatious text message she sends him on her lunch break? He’s not sure, but … he’s not going anywhere. Love is winning, and this matchmaking is really happy about it.