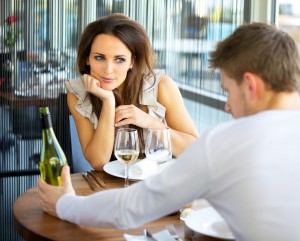 Allen and Christine met for a first date last night. I love everything about this match – they meet each other’s Top Five Critical Criteria, they both gave me the big Thumbs Up after studying the profile and photos, and they were both super excited to meet. And yet today’s post-date feedback from both was kinda flat. Here’s why…

Christine was favorably impressed with Allen – she finds him to be really attractive, impressive, accomplished, interesting to talk with, and they share all kinds of passions. Their musical taste and favorite movies are in synch, they’re both on-go for marriage and kids, and they live near each other. All checked out just beautifully, but she said that she didn’t think he was “into her” and so she figured this would be a one-date-wonder. And then she asks me who else I have in store for her to meet. UGH, says the matchmaker.

Allen said that she’s adorable, really sweet, easy to talk with, thoughtful and considerate, and he says she checks out really well too. And get this – he said that he didn’t think she liked him, so he figured it wouldn’t go anywhere, and who else do I have in mind for him. UGH again, says the matchmaker.

What? Huh? Really? This is the kind of thing that makes this matchmaker want to pull her hair out. Here’s what actually happened – He was waiting for a sign from her that he had a shot at her. She was waiting for a clue from him that he was attracted to her and that he’s interested in her. And so they both held their cards too close to their chest, waiting for the other person to show interest. Neither did, and so they both left feeling discouraged and disappointed.

Fortunately, they have a matchmaker in the mix, who is bound and determined to save this introduction. I let him know that she thinks he’s great and would love to see him again. I shared similar post-date feedback with her, and so he jumped in to ask her out for Round Two. Thank goodness.

Here’s the trick, folks – if you are interested in the person sitting across from you, let your face know. Have the courage to lean in – truly. Don’t sit back and wait for the OTHER person to show interest. You be the one who is actively engaged, who leans in, demonstrating sincere interest and curiosity in who this other person is.

I picked up another post-date feedback message this morning, from Bruce, who met Allison last night. And it was perfect, the way he shared about what he called the Turning Point in the evening. Allison had been listening intently to a story he was sharing about his father’s illness. She paused, took a breath, and placed her hand over his, saying “I’m touched by the depth of love that you have for your father; it says a lot about you.” And BINGO…. Right then and there, he was sold, hooked, and thoroughly interested in her. You see how this works? If she had sat there, unresponsive, impenetrable, then nothing would likely have happened.

In order to connect, we need to be vulnerable. Vulnerability is not about waiting for the other person to open up first. It’s about having the strength to open your OWN heart first.
Want your dating life to be more fruitful? Practice demonstrating interest, rather than waiting for someone else to do it.