How Some Women Are Becoming Marriage Material in an Unlikely Era 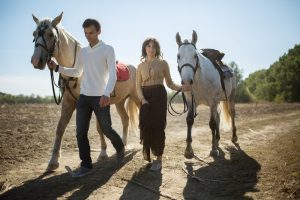 The Women’s Liberation movement opened up so many possibilities for women, and progress is a good thing. Yet, along with that progress has been suffering of another sort – the realization that is seeping into our modern day culture – that a “liberated” woman’s raw power, strength and the illusion of self-sufficiency can and does douse the fire in a “real” man’s heart and libido.

As a professional matchmaker and dating coach, I see this on a daily basis – a super strong, accomplished woman who’s positively fabulous, who’s got the world by the tail, but who can’t find a man who’s “her equal” – Now, it’s not that these men don’t exist – they surely do, but …they’re not lining up on her dance card.

These Liberated Ladies come to me in a steady stream, asking me to FIX IT, but the honest to goodness truth is that if in my gut I don’t sense that she “gets it” about how to be with a strong,   very together, highly masculine man, (in a way that works for HIM) I won’t take her on as a matchmaking client. Why? Because I don’t want to see her fail, and I surely don’t want her failing under my watch. Until she’s learned how to be the kind of woman whom a truly masculine man wants and needs by his side, no matchmaker on the planet can work magic for her.

The GOOD news? The secrets are OUT and they’re not that hard to learn… !!

With over 1100 marriages in our history, Gil and I have had a front row seat, watching so many would be couples stall out on the first date or in the first month or two of trying to be together. And while it’s really easy to see all of the things folks are doing WRONG, what inspires me is to see what’s working well – how SO MANY couples DID find and learn to sustain lasting love. Guess who has all the power? Yep, it’s us girls… we’re the relationship enablers, if we know what to do and if we get really good at it…

Yin/Yang – The uncomfortable truth. The more masculine we want our men to be, the more feminine we need to be – continually, in order for there to be a natural fit, a complimentary blend of energies that can possibly stick together stand the test of time in today’s complex world.

I’m seeing a movement of a different sort today – a purposeful practice among growth-oriented, eyes-open kind of women – this new, modern day woman is actively seeking out information about how to love better. And these women are practicing powers of a new sort. When I study couples whose partnerships have stood the test of time, I see a new breed of feminine woman emerging, and it’s thoroughly exciting to me. These remarkable women have figured out a new way of being powerful – and ironically it’s through the study of how to empower the MEN in their lives. AHA….!

Let’s shed light on some of the common denominators – The qualities and attributes that I see among the women who are being plucked off the vine, chosen for partnership, in this highly competitive arena. Here are some examples of the kinds of practices these successfully-coupled women have been consciously implementing in their romantic lives.

Lisa’s guy wakes up slowly, like a bear, and his early morning “gruffness” left her feeling unloved and unappreciated. She has learned to give him “the gift of silence” in the mornings. She   practices “taping it” until she sees or intuitively feels that he’s ready to engage. She’s learned to curb her “unconscious chatter mechanism” and she says that learning about this one small (but intentionally chosen and diligently practiced) adaptation changed everything for the two of them.

Debbie and Matt spend every Sunday morning trailering their two magnificent horses into the mountains for an all-day ride. Debbie shared that while on horseback, she and Matt have their deepest, most heartfelt discussions. BUT she learned the hard way that the time to talk about ANYTHING important is not until the ride is well under way.  She too learned to “tape it” while his focus is on getting the horses in the trailer, organizing the tack, strategically maneuvering the truck to hitch the trailer – NOT a good time to dump anything off-task on the poor guy. Learning about and practicing timing was the key to making Sundays the most love filled day of the week for them both.

When to say something and when to Tape It. Just one of the many lessons that our Women-In-Love have shared with us. More to follow in future blogs.

Interview with Julie Ferman: How To Let Him Be a Man in a Relationship
Why His Eyes Glaze Over…